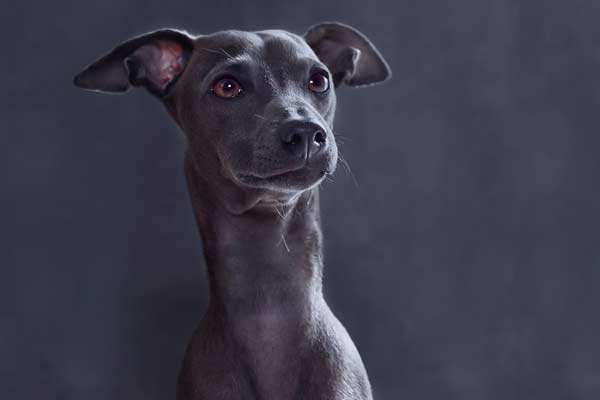 It probably would not surprise you that blue Greyhounds are among the rarest color possibilities for the fastest dog on earth. Only a solid white Greyhound is rarer. But what does blue signify in the Greyhound world?

Greyhound owners and experts generally refer to the color blue as grey in their dogs. However, like in other breeds, blue results from a coat dilution.

A specific combination of genes causes what would ordinarily be black hair to wash out to a shade of charcoal, bluish-gray, or silverish-blue.

The blue coat in Greyhounds can also extend to fawn and brindle dogs. Sometimes, aficionados will refer to these dogs as blue variants.

What colors can Greyhounds be?

Despite the suggestion in their names, Greyhounds come in a vast array of colors. Since the dog’s main purpose is racing, the AKC considers a Greyhound’s colors irrelevant.

The American Greyhound Track Operators do not specifically recognize blue fawns, instead classifying them as blue Greyhounds. They also make distinctions the AKC would not require, such as the fawn brindle.

According to greyhound track records, 37% of Greyhounds are brindle, and 20% are white with patches of color. Of the self-colored Greyhounds, 6% are fawn, 18% are black, 16% are red, and 3% are blue.

Why Greyhounds Are Not Gray

People designate the formal color of a few breeds as gray or grey, although they are technically blue.

This occurs in the Cane Corso. Some breeds can have both blue and gray in their ranks, like the Poodle.

Greyhounds are unusual in that the formal designation of a bluish or grayish dog is blue, but people informally call them gray or grey.

It could result from the breed’s name, although its roots are not believed to be related to color. What is the difference between gray and blue?

In stark contrast to the dilution gene, the greying gene is progressive. It usually affects black or liver-colored dogs, and the fur becomes lighter over time.

Puppies are born with dark coats that do not show the first signs of grey until the dog is six months old.

Lightening is gradual, and since it affects the hair as it grows, shaving a grey dog will revert it to its original dark color. Therefore, you will not see the expression of greying in short-haired dogs.

Unlike gray dogs, blue puppies are born with bluish coats. Although blue Greyhounds may darken or lighten a few shades with maturity, they do not show the dramatic lightening that gray dogs do.

The dilution gene that causes blue coats and the greying gene work to lighten eumelanin, the pigment that produces dark eyes, lips, paw pads, skin, and fur. That is where the similarities end.

The dilution gene, often designated by “d,” is recessive. To be blue, a puppy must acquire (inherit) a “d” gene from both parents. This can happen in a few ways.

You may have heard of a blue-nosed Pitbull as a classic example of this phenomenon. Blue dogs also show bluish paw pads, dusky skin, and dilute eye rims.

A dilution gene also often affects phaeomelanin, the pigment responsible for reds and yellows in a dog’s coat color. This is relevant for blue brindle and blue fawn Greyhounds.

The greying gene is incompletely dominant. Expressed as “G,” a dog with one “Gg” or two “GG” copies of the greying gene will show in the coat lightening upon maturity. Dogs with one copy express less dramatic greying than those with two copies.

As alluded to earlier, blue Greyhounds come in three forms. Self-colored blue dogs can be solid blue, blue with white markings, or white with blue patches.

They range from charcoal gray to steel blue to gray with a slight bluish cast to silvery. Most have amber eyes, but some have gray, blue, or hazel peepers.

Blue brindle Greyhounds have a diluted fawn base with bluish striping. Some dogs look a muddy gray underneath their markings.

Blue fawn Greyhounds are difficult to distinguish from their blue counterparts. They have a tannish or reddish base with obvious blue overtones. 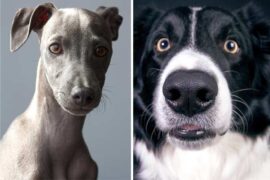 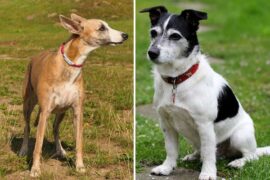 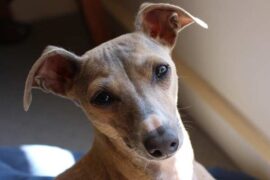 Why Do Greyhounds’ Teeth Tend to Chatter, and Should I Be Concerned? 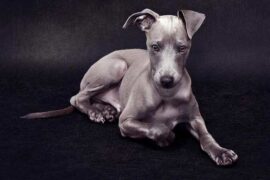 Do Italian Greyhounds Bark and Are They a Noisy Breed?